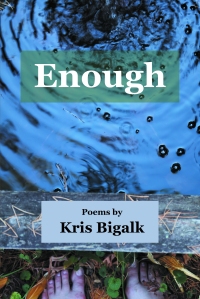 Click here to order, or view other ordering/purchasing options here. Thinking of reading Enough in your class or reading group? Check out these discussion questions and observations about Enough on Lyricality’s blog.

Enough is a scintillating collection of individual poems that reads brilliantly as one arc, recasting the Echo/Narcissus story in terms of modern love. It is enthralling to see how the single word “enough” functions as the perfect conceit and duality for Kris Bigalk’s latest collection. The poems move from the intense sensuality of a relationship in which the desire the speaker feels for the “you” is never adequately reciprocated or enough, to the unsuccessful attempts at finding a mere satisfaction or what will suffice, to the speaker, heartbroken, finally having enough and working toward letting go. Accentuating this journey of desire, loss and longing, then contemplation and recovery is the myth of Echo and Narcissus, which ribbons its way both overtly and subtly through the collection. However, Bigalk recapitulates the myth, allowing the speaker a path to healing, thus refusing to reduce the speaker to complete despair over unrequited love, as Ovid does, turning a heartbroken nymph to a mere echo.

My narcissus was a gift, a raw round heart encased in paper brown skin
that flaked off in my hands.  He slept in my palm, nestled into the dark
space as my thumb closed around him.

After I put him into his bed, covered with cold earth, I waited, and he opened his fist,
reached up through the soil with his three fingered hand.

You know the rest of the story, how he became lost in himself, drowned himself
in his idea of himself.

All that’s left now is his withered body, cut off, lying in the dirt, turning to dirt, the
snow slowly burying him.  But his heart, the one I loved first, beats underground.